Thomas Smith was born 1893[2] the son of John George and Mary Elizabeth Smith.  There were 8 children, all born at St. Helen’s Auckland:[3]

Thomas Smith enlisted at Bishop Auckland into his local Territorial Force, the 6th Battalion the Durham Light Infantry and was given the regimental number 251168. [7]  The service record of Lance Corporal Thomas Smith has not been researched.

The 1/6th Battalion was formed in Bishop Auckland in August 1914 as part of the Durham Light Infantry Brigade, Northumbrian Division and in May 1915 were under the orders of the 151st Brigade 50th (Northumbrian) Division. [8] 16 April 1915 the Division moved to France and served with distinction on the Western Front throughout the war.  Other battalions were:

Following heavy casualties in June 1915 the battalion merged with the 1/8th to become the 6/8th then it returned to its original identity 11 August 1915.  The Brigade was joined by:

Following the German Spring Offensive it was reduced to cadre strength in July 1918 and transferred to Lines of Communication. [9]

The Division took part in the following engagements on the Western Front:

The following 3 battles are also known as the First Battles of the Somme, part of the German offensive in Picardy, France.

The following 2 battles are known as the Battle of the Lys.

Following a most trying time on the Somme and the Lys battlefields, the Division was withdrawn and sent to IX Corps then on the Aisne, believed to be a much quieter area.  Unfortunately this was not the case and the Division was hit hard by another German attack.

After suffering particularly heavy casualties while on the Aisne, the Division was substantially reorganised. [10]

The German Offensive, Spring 1918: an overview

3 March, Soviet Russia made peace with Germany and her allies by virtue of the Treaty of Brest-Litovsk.  As a result, Germany could now transfer troops from the Eastern Front to the Western Front.  More importantly, these Divisions included the original elite of the German Army – the Guards, Jagers, Prussians, Swabians and the best of the Bavarians. In all, 192 Divisions could be deployed in the West.  The Allies could field 178 Divisions. [11]  A single division numbered about 19,000 men. [12]  Ludendorff could call upon about 3,650,000 men as opposed to the Allies 3,380,000.  Thus, the Germans now held superiority in numbers.

The German High Command needed victory to be gained before the American Forces arrived in Europe in huge numbers.  America entered the war 6 April 1917 and in the July, Pershing General of the Armies of the United States asked for an army of 3 million men.  The first of her troops arrived in France 26 June 1917.[13] The training and build-up of troops obviously took time but eventually by June 1918, the Americans were receiving about 250,000 men a month in France.  This amounted to 25 divisions in or behind the battle zone and another 55 in the United States ready to join the action.[14]

Elsewhere in the Alliance, the French were able to draw on a new annual class of conscripts after a year of inactivity but the British were worn down by continuous fighting during the summer of 1917 with major offensives at Arras, Messines, Passchendaele and Cambrai.[15]  The strength of the British infantry had fallen from 754,000 in July 1917 to 543,000 in June 1918 producing a manpower crisis.[16]

The Germans enjoyed spectacular territorial gains particularly during the initial phases of the offensive.  23 March, the Kaiser declared a “victory holiday” for German schoolchildren.

The German High Command calculated that it required 200,000 replacements each month but only 300,000 recruits stood available taking into account the next annual class of 18-year olds.  There were 70,000 convalescents available from hospitals each month but even counting them, the strength of the German Army had fallen from 5.1 million to 4.2 million men in the 6 months of the offensive.  It could not be increased on the estimated scale required. [19]

To add to this dilemma, in June 1918, the first outbreak of “Spanish Flu” laid low nearly 500,000 German soldiers.  This epidemic was to reoccur in the autumn and wreak havoc throughout Europe and the wider world.[20]

Added to this the poor diet of the German troops, battle fatigue, discontentment with the military leadership, social unrest at home and a general realisation that their great effort was beginning to wane, the Allies counter attack in mid-July began to seize the initiative.  Sweeping victories over demoralised German forces eventually led to the resignation of Ludendorff 27 October, the abdication of Kaiser Wilhelm II 9 November and the signing of the Armistice 11 November 1918. [21]

The German attack was launched by 4,000 guns across a 40km front against 4 Divisions of the IX Corps.  There was a heavy concentration of British troops in the front line trenches and casualties from this bombardment were severe.  In fact the IX Corps was virtually wiped out.  The bombardment was accompanied by a gas attack after which 17 German infantry divisions advanced through the gaps in the line.  Rapid progress was made and the Germans broke though the reserve troops (8 Allied Divisions – 4 British and 4 French) between Soissons and Rheims.  By the end of the first day, the Germans had passed the Aisne and reached the river Vesle gaining 15km of territory.  3 June, they had come within 90km of Paris and captured 50,000 Allied soldiers and 800 guns.  French casualties were heavy, with 98,000 losses.  The British suffered 29,000 casualties.  6 June, the German advance had run out of steam.[22]

The first week of April saw the 6/DLI involved in action in what was to become known as the Battle of Lys before it was relieved and sent to join the French troops in the line at Chemin des Dames in the area of Soissons, thought to be a quieter area.  In early May, an epidemic of influenza visited the training camp at Arcis before the battalion marched to billets at Glennes, a small village near Aisne.  6/DLI moved up the line to relieve the 73rd French Infantry in the woods east of the Craonne Plateau.

26 May: All was quiet until the evening when the message was received that an enemy bombardment was to take place the next morning.

4.50am: enemy attack had overwhelmed the forward posts.  X Company wiped out, enemy advancing rapidly, reserve company (Z) close to HQ had the enemy on top of them.  Lieut.-Col. Walton and about 40 men searched for the best place to make a stand, still under a barrage.  5/DLI came up to the communication trench to find it occupied by the enemy.  Battalion practically “annihilated”

Afternoon:  Lieut.-Col. Walton, a few men of the 8/DLI and 5th Northumberland Fusiliers held the bridge at Concevreux.  They were not joined by any men from the front.  For the next 2 days, 2 commanding officers of the 6/DLI and 8/DLI found themselves in command of various men of other battalions.

29 May: the remnants were ordered to move from Villers Argon to Baslieux-sous-Chatillon:

“before reaching the latter place, every available man was again collected to form part of a company under Major Heslop, representing the remnants of the 151st Brigade in a Battalion to which each Brigade of the Division contributed one Company.”

After a night at Quisles Chateau, the battalion moved towards Vile-en-Tardenois to support the 74th Brigade.  The 151st Brigade Company were ordered to act as advance guard and to seize the high ground north and east of Romigny.  This was done but the enemy attacked in force and the Company was driven out to a position south of the village which they held until reinforcements arrived.

“The remnants of the Division, except the Composite Battalion, were assembled at Vert-la-Gravelle, south of the Marne when a Composite Brigade was formed…After a week spent in reorganisation, moved up to Chaumuzy and the Bois de Courton where it did good work in a counter attack on the Bligny Ridge.”

Lance Corporal T. Smith was killed in action 27 May 1918.  He has no known grave.  The exact circumstances of his death remain unknown.  Between 27 and 31 May 1918, 6/DLI lost 3 officers and 82 other ranks. [24]  Another local man to be killed during this action was 250264 Serjeant John Robertson Field.  He has no known grave and is commemorated on the Soissons Memorial, France,[25] the West Auckland War Memorial and the Roll of Honour, West Auckland Memorial Institute.

The War Diary of the 6/DLI for June 1918 provides the following details:

“VERT la FRAVELLE June 1st – Remnants of Battn (about 35 fighting men) inspected by GOC Divn.  About 35 men under Capt. HARE were still in the line and were in action with the French near BOIS de BONVAL.

6 June: 1/6 DLI was relieved by the 9/Cheshires at Montagne de Bligny.

8 June: 1/6 DLI moved back to Chaumuzy where it was joined by Capt. Hare’s party.  News came that the 50th Division was to be broken up and early in June the remnants entrained at Sezanne for the Abberville area.  They took billets at Caumont where orders were received that the battalions were to be reduced to the strength of Training Cadres (10 officers and 50 other ranks)

“It may be mentioned that that the total casualties in the battalion during the months of March, April and May had been 60 officers and over 1,200 other ranks.”[26]

The Training Cadres of the 5th, 6th and 8th DLI moved to Dieppe then about the middle of August moved onto Rouen.

Lance Corporal T. Smith is commemorated on the Soissons Memorial.  It commemorates almost 4,000 officers and men of the United Kingdom who died during the Battles of the Aisne and the Marne in 1918 and who have no known grave. [28]

[1] Commonwealth War Graves Commission Note: Soldiers Died in the Great War records his date of death as 31 May 1918. 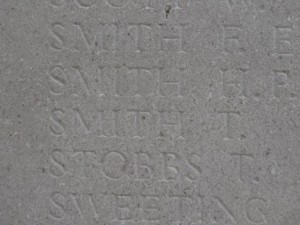