33255 Private George Spavin, 13th Battalion the Durham Light Infantry died of wounds 28 December 1916 and is buried at Lijssenthoek Military Cemetery, Belgium.[1]  He was 33 years old and is commemorated on the West Auckland War Memorial and the Roll of Honour, West Auckland Memorial Hall.

George Spavin was born 1884 at Scampston, near Malton, North Yorkshire[2] the son of William and Mary Spavin.  There were at least 5 children: [3]

In 1891, the family lived at Scampston, North Yorkshire where 42 year old William worked as a “yardman” [presumably some kind of agricultural labourer].[4]  By 1901 17 year old George was a “servant” working as a carter at Manor Farm, Rillington near Malton.[5]  By 1911, 27 year old George was a boarder with Walker and Mary Carr, 7 Brewery Cottages, West Auckland where George worked as a drayman.[6]  West Auckland Brewery Company was located to the north of the village green behind the Manor House.  In June 1911, George married Annie Harriet Fawcett at Willington Parish Church.  They had at least 4 children:[7]

The 13th (Service) Battalion was formed in September 1914 as part of K3 Kitchener’s New Army and came under the orders of 68th Brigade 23rd Division.  It landed in France in August 1915.[14]  The 68th Brigade comprised the following units:[15]

In 1916, the Division took part in many engagements during the Battle of the Somme:[16]

6 October: 12/DLI & 13/DLI took over the front line just south of Le Sars.  12/DLI was tasked with taking the Tangle, a machine gun nest and the sunken road east of Le Sars.  13/DLI had to clear the rest of the ruins to establish a line beyond.  At 1.45pm 12/DLI advanced escorted by a female tank and they overran the Tangle but the sunken road was stoutly defended.  13/DLI kept in touch with 12/DLI by means of a patrol, using shell holes to advance and from which they could fire at the enemy using bombs.  A heavy barrage was thrown at the attackers.  “B” and “C” Company were in the thick of it.  Machine gunners in Le Sars stopped the leading wave of “C” Company at the outskirts of the village and the battle raged through the sunken road and the ruins of the village.  By 3.30pm it was reported that there was no sign of the enemy.  “A” Company set to on work with defences.  The whole of the captured area was heavily shelled thereafter.  13/DLI captured 150 Germans and 30 wounded men were found in the ruins.  Captain H.F. Blake was killed in action and there were 57 casualties in the ranks.

7 October:  the German bombardment continued all day.  A patrol met the enemy on the Bapaume road beyond Le Sars and 15 more 13/DLI men were killed.  They were relieved by troops of the 15th Division at night.

Later research records that between 6 and 8 October 13/DLI lost 1 Officer[18] and 24 Other Ranks, killed in action or died of wounds.[19]

After being relieved 8 October 1916, the 23rd Division was moved north to the Ypres Salient and detrained at Proven 15 October.  The next 4 months the routine of trench warfare continued.  Wet weather and frost accompanied this warfare in trenches around Zillebeke Bund.  When in reserve 13/DLI occupied the brigade camp at Winnipeg Camp near Ypres.[20]  The 13/DLI War Diary has not been researched so the circumstances of Private G. Spavin’s death are unknown.  Private G. Spavin was wounded 22 December 1916 and taken to 3 Canadian Casualty Clearing Station suffering from a gunshot wound to the right leg thigh.[21]  He succumbed to his wounds 1.30am 28 December 1916.[22]  Three Other Ranks serving with 13/DLI were killed in action 22 December:[23]

All 3 are buried at railway Dugouts Burial Ground (Transport Farm), south east of Ypres.[24]  Perhaps they were all hit by shellfire.  During the month of December 1916, there were 7 ORs killed in action or died of wounds – a relatively quiet tour for 13/DLI.[25]

Private George Spavin is buried at grave reference XC.41A Lijssenthoek Military Cemetery, Belgium.  His wife had the following epitaph inscribed on his headstone:

Greater Love Hath No Man Than This

Lovingly Remembered By His Wife And Children

During WW1 the village of Lijssenthoek was situated on the main communication line between the Allied military bases in the rear and the Ypres battlefields.  Close to the front but out of the extreme range of most German field artillery, it became a natural place to establish casualty clearing stations.  The cemetery was first used by the French 15th Hospital D’Evacuation and in June 1915, it began to be used by CCS of the Commonwealth forces.  From April to August 1918, the CCS fell back before the German advance and field ambulances took their places.  The cemetery contains 9,901 Commonwealth burials of the First World War.[27]

[3] Army Form W.5080 records Herbert Spavin and 3 sisters so there could have been 7 children

[10] Statement of the Services

[19] Soldiers Died in the Great War 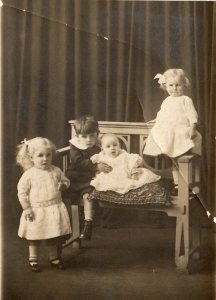 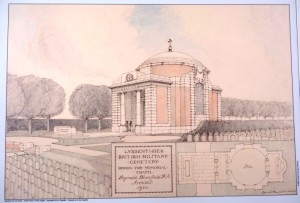 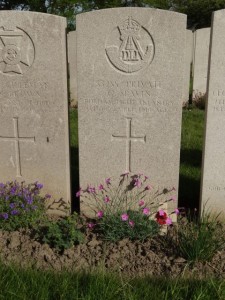 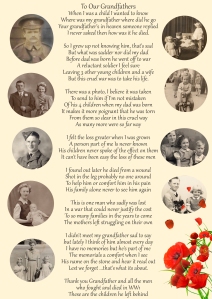