Allan Speleers was born c.1917, [2] the son of Emmanuel Carolus Franciscus Speleers and Margaret[3] [nee Allan].  There were at least 3 sons:[4]

Emmanuel C.F. Speleers was a Belgian national [7]and seems to have enjoyed an adventurous life working in West Africa.  In May 1913, he travelled aboard, “Professor Woermann” embarking at Dover and bound for Duala, then a German colony Togoland & Kamerun.[8]  He was registered as a Traders Manager, 32 years old, permanently residing in England and heading for the French Ivory Coast via Port Bassam.[9] A later schedule August 1921, records Emmanuel C.F. Speleers, a Belgian subject, of 34 Peel Street, Thornaby-on-Tees, working as a logger arriving at Liverpool from West Africa.[10] Emmanuel C.F. Speleers died 3 May 1923 at Azim, Gold Coast, West Africa[11] and his effects [£668 13s 5d] were determined at probate 9 October 1923 to William Allan plater and Albert Edward Allan, hotel proprietor.[12]  Albert E. Allan was Margaret’s younger brother.[13]

The service record of Lance Corporal A. Speleers has not been researched.  The 1st Battalion, the Middlesex Regiment was a regular Army unit and part of the Allied Force posted to Hong Kong. 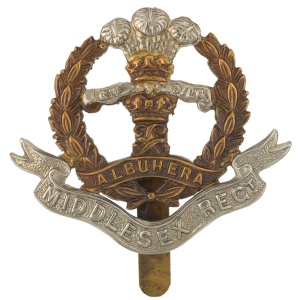 Japan attacked Pearl Harbour and later in the day they attacked Hong Kong.  In a little over 2 weeks, on Christmas Day 1941, 14,000 men from British and Canadian Forces together with the Hong Kong Volunteer Defence Corps were forced to surrender to the Imperial Japanese Army. The force held out against overwhelming odds for 17 days.[17]

The compliment of the 1st Battalion, the Middlesex Regiment was 36 Officers and 728 men.  Lance Corporal A. Speleers served with the unallocated “D” Company.[18]  The Battalion War Diary has not been researched.

British military leaders understood that Hong Kong was not strategically important, thus on the eve of the Japanese invasion, the territory was only lightly defended with British, Indian, and Chinese troops. The garrison had 29 coastal guns, all deployed on Hong Kong Island, and was supported by a small naval contingent consisting of one destroyer, eight torpedo boats, and four gunboats. In November 1941, two Canadian infantry division arrived to reinforce the garrison, bolstering the strength to 15,000 men.

Just before the start of the Pacific War, 52,000-strong Japanese 38th Division under the command of Takashi Sakai gathered just north of the border. Inaccurate British intelligence reported that only 20,000 men were present, thus providing the garrison a false sense of security.

At 0800 on 8 December 1941, eight hours after the Pearl Harbour attack, the Japanese troops poured across the border, engaging the British and Commonwealth troops dug in along the Gin Drinker’s Line immediately behind the border. British Major General Christopher Michael Maltby lost the few aircraft he had under his command, therefore had a difficult campaign early on as he had no control of the air while his troops were out-numbered. During the night of 9 Dec, Japanese troops mounted a massed attack on the western portion of the defensive line, and the Gin Drinkers’ Line collapsed by 10 Dec. On 11 Dec, as Japanese troops advanced southward along the Kowloon Peninsula, Maltby ordered the evacuation of all troops to Hong Kong Island. On 13 Dec the Rajputs of the British Indian Army, the last of the British troops on the mainland, fell back onto Hong Kong Island.

After a failed call for surrender on 13 Dec, the Japanese again demanded surrender on 15 Dec. After receiving the rejection, Japanese artillery and aircraft conducted an intense bombardment on Hong Kong Island on 15 Dec. On 17 Dec, yet another demand for surrender was issued, but was again rejected. A light Japanese force crossed the Lye Mun Pass and landed on Hong Kong in the evening of 18 Dec, and a stronger beachhead was established by the next morning. On 19 Dec, the Japanese troops overran the key Wong Nai Chong Gap in the center of the island, thus dividing the British defence in half. By 20 Dec, the Japanese held control of the western half of the island. It was then that the worst of the atrocities began. At the Salesian Mission on the Chai Wan Road, the Japanese massacred nuns and members of the medical staff there after they had surrendered. As the Japanese captured the reservoir, the British garrison’s water supply situation grew desperate quickly. On 24 Dec, Japanese soldiers entered the British field hospital at St. Stephen’s College and tortured and killed over 60 injured soldiers, nurses, and doctors.

In the afternoon of 25 Dec 1941, later named “Black Christmas”, Governor General of Hong Kong Sir Mark Aitchison Young surrendered at the third floor of the Peninsula Hong Kong hotel. In the 18-day battle, Japan suffered 2,754 casualties and the British 11,848. Isogai Rensuke was named the Japanese military governor of Hong Kong. Japanese atrocities remain rampant despite the end of fighting. Many women, including nuns, were reported raped and some killed. Some British officials were forced to dig their own graves before being executed. Ramon Muniz Lavelle, Argentinian commercial attaché to Tokyo, was in Hong Kong shortly after the initial battle; he documented incidences where British soldiers were bayoneted while they laid helplessly in their beds at the Stanley Hospital. He also reported witnessing British women, with their hands tied behind their backs, repeatedly raped by Japanese soldiers.

The local Chinese waged a guerrilla war against Japanese occupation under the banner of two groups, Gangjiu and Dongjiang. Resistance continued until the day British rule was re-established in Hong Kong on 15 August 1945.

Lance Corporal Allan Speleers, 1st Battalion, Middlesex Regiment is commemorated at column 14, the Sai Wan Memorial, Hong Kong Island, Hong Kong, the Butterknowle War Memorial, the Roll of Honour in St. John the Evangelist church, Lynesack.  Most of those buried or commemorated on the island were killed at the time or died later as internees or prisoners of war during the Japanese occupation.  The Sai Wan Memorial forms he entrance to the Sai Wan War Cemetery and bears the names of more than 2,000 Commonwealth servicemen who died in the Battle of Hong Kong or in captivity who have no known grave. [21]

[7] Possibly his sister or sister-in-law Marguerite Spellers travelled on the Canadian Pacific Line, “Empress of Canada” between Quebec and Liverpool 8 – 15 July 1949

[9] Return of Passengers leaving the UK dated 26 May 1913. The French Ivory Coast is now called Cote d’Ivoire. The name is recorded as E.L.C. Speleers.