4/8777 Serjeant John William Spence, 2nd Battalion the Durham Light Infantry died of wounds 1 December 1917 and he is buried at Ribecourt British Cemetery, France.  He is commemorated on the Evenwood War Memorial, Butterknowle War Memorial and memorial in St. Mary’s Church, Staindrop.[1]  He was 27 years old, married to Ellen and they had 2 children Robert and Monica.

John William was born 1890 [2] at Staindrop the son of Joseph and Charlotte Spence.  There were at least 10 children, all born at Staindrop:

Joseph worked as a builder.[4]  By 1911, Joseph and Charlotte lived at the Slack, Butterknowle.  He worked as a stone mason.  John aged 20 and Alfred aged 17 were coal miners (putters) and Louisa aged 14 had no occupation so presumably helped her mother at home.  Elizabeth aged 11 was at school.  Emily aged 9 and Joseph aged 5 were at home. [5]  In 1913 John W. Spence married Ellen Wappett.[6] By 1914, John W. Spence was living at Bowes Close Farm with his wife Ellen and 2 children Robert William and Monica.  [7]

John William Spence joined the 4th Durham Light Infantry in August 1914.  The 4th (Extra Reserve) Battalion (4/DLI) was formed in August 1914 at Barnard Castle and was a depot/training unit which moved to Killingworth in December and Forest Hall in January 1915 and finally to Seaham Harbour in September 1915 as part of the Tyne Garrison. [8]  He was given the regimental number 4/8777.  He was 23 years 232 days old when he attested 10 August 1914 and worked as a miner.  He was 5ft 8¾” tall and weighed 146 lbs. [9]  The Evenwood Parish Magazine confirms that John Spence joined the 4th Battalion DLI [10]  This battalion remained in Britain throughout the war.

His service record is as follows:[11]

Private J.W. Spence served 60 days in France between 10 June and 8 August 1915 serving with 10/DLI.[12] During this period 10/DLI was in Belgium around Ypres.  10/DLI came under the orders of the 43rd Brigade, 14th (Light) Division.[13]  The 14th Division held the line across the Menin Road below the 6th Division opposite Hooge.

16 June 1915:  the 3rd Division which held the line to the south of the 14th Division attacked on the night of 15/16 June towards the hamlet of Hooge south of Bellewaarde Lake.  The second German line was reached but the attack fell away.  The 42nd Brigade, 14th Division was ordered to support the 3rd Division attack but due to heavy casualties caused by heavy German shellfire, the attack fell away.  Two further attempts to seize the German line were made by the 24th Division in the area of Railway Wood but broke down under heavy fire.

30 July: the 41st Brigade, 14th Division held the front at Hooge Crater which had been blown by the Germans on the night of 29/30 July and they were attacked by liquid fire (Flammenwerfer).  Some trenches were lost and attempts by the 2 brigades, the 41st and 42nd of the 14th Division to retake the lost trenches failed.  Three battalions of the 43rd Brigade including 10/DLI then relieved the 41st Brigade which had taken heavy casualties.

It was then decided to relieve 14th Division by the 6th Division which was a regular army division.[14]  A later attack by the 18th Brigade with 2/DLI was regarded as a success although 2/DLI suffered heavy casualties 9 August 1915 at Hooge.

Private J.W. Spence was back home between 9 August 1915 and 9 May 1916, probably serving with 3/DLI another Reserve Battalion based at South Shields.  13 January 1916 he was promoted to Lance Corporal.

2/DLI came under the orders of 18th Brigade 6th Division which landed at St. Nazaire 10 September 1914.  It proceeded to the Western Front where it remained throughout the war.  It arrived in time to reinforce the BEF on the Aisne before the whole army was moved north to Flanders.  The 18th Brigade comprised:

The onset of winter, 1917 brought about another major British offensive began at Cambrai which was to be the final campaign for Serjeant John W. Spence.

In popular mythology, the Battle of Cambrai ranks as one of the most thrilling episodes of the whole war – at last, tanks came into their own and the notion that the Hindenburg Line was impregnable was exploded.  However, the early success was not capitalised upon and the German counter attack regained much land and even captures areas previously held by the British.

Cambai was an important railhead which lay at the junction of railways connecting Douai, Valenciennes and Saint-Quentin an also was located on the Saint-Quentin Canal.  Also, it was an important HQ and billeting town. As a military target, its capture would deny the enemy of a key part of their communication system.

As usual, the offensive was preceded by an artillery bombardment – 1000 guns and howitzers firing 900,000 rounds of shells opened up at 6.10am on the 20th November but the secret weapon was the 476 Mark IV tanks, the entire strength of the Tank Corps.  On the right the 12th (Eastern) Division moved forward.  The 20th (Light) Division, the 6th Division, the 51st (Highland) Division, the 62nd (2nd West Riding) Division and the 36th (Ulster) Division moved forward.  The 6th Division crossed the Hindenburg Line and captured Ribecourt and fought as far as and through Marcoing.  The 5th Cavalry advance through them but were repulsed at Noyelies.

27 November:  the Third Army closed down offensive operations and units were ordered to consolidate.  Three days later the German Army struck back.  On the right flank, the break into the British positions was swift – the defending 55th (West Lancashire) Division and much of the 12th (Eastern) and 20th (Light) Divisions evaporated.  By 9.00am on the 30th November, the Germans had penetrated almost 3 miles towards Havrincourt Wood and the Third Army faced disaster.

All objectives gained with few casualties by 12 noon.

The 2/DLI and 14/DLI were heavily involved in this battle with the 14/DLI on the night of the 2/3 December “having stiff fighting” across and astride the canal to the east of Marcoing, an action which inflicted casualties of 15 officers and 262 other ranks, more than half being killed.  Captain Lascelles gained his VC here.

10 December:  the Division was withdrawn, after 3 strenuous weeks, to the Basseux area to the south west of Arras.   A further report notes:

“The only other incidents of note were the repulse by the 18th Infantry Brigade of a half-hearted enemy attack on Cantaing on the 1st December and D.H.Q. being three times shelled out of its headquarters between 30th November and 9th December.”

30 November:  there was heavy enemy shelling causing a number of casualties.  Second Lieutenant Adlington was killed and the Germans broke through at Gouzecourt.  Captain Shea was mortally wounded and 4 Other Ranks were wounded.

1 December:  the enemy landed another attack at Cantaing from Lafoilie Wood and the ridge to the south of it.  This was driven back.

On the enemy breaking through GOUZECOURT Captain & 2Lt. Shea organised every possible man including details (2 m.sgts. tailors, shoemakers etc) and held our important ???? south of GOUZECOURT. Until relieved by the Guards Brigade.  Capt. Shea mortally wounded and 4OR wounded.

1 Dec 1917: At 1.45pm enemy launched an attack against our position at CANTAING from LAFOLIE WOOD and the ridge south of J.  He was driven back by a good shrapnel barrage, Lewis gun, machine gun & rifle fire and did not repeat his offensive.

Later research records that Second Lieutenant G.W. Adlington was killed in action and Captain J.P.L. Shea MC died of wounds and 6 Other Ranks serving with the 2/DLI were killed in action or died of wounds on this date. [23] It is reasonable to assume that Serjeant J.W. Spence was one of the 4 Other Ranks wounded as a result of enemy action on 30 November/1 December 1917.

“Roll of Honour: In Memoriam: Spence

In our home you are fondly remembered

Sweet memories cling round your name

And those who have always loved you

Will love you in death just the same

Ever remembered by his loving brother and sister in law, Alf and Sithie.”

Sergeant J.W. Spence is buried at grave reference I.D.21 Ribecourt British Cemetery.  Ribecourt is a village about 10km south west of Cambrai.  On 20 November 1917, the 6th Division took the village at the conclusion of the Battle of Cambrai and it remained practically on the front line.  The cemetery was begun by the 6th Division in November 1917 and used until March 1918 when it was recaptured during the German spring offensive. [25]

[24] Appendix 1 of the Divisional History 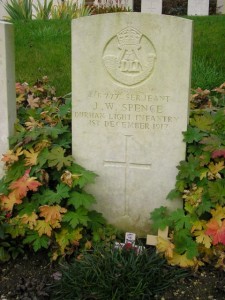