4 cottages built near the Colliery Institute, St. Helen’s Auckland constitute the local war memorial.  2 were erected (at a cost of £4,200) by Messrs. Pease & Partners, owners of the colliery and 2 by subscriptions of the men employed there.  The formal opening took place Saturday 12 November 1921.  Mr. F. Chapman presided and stated that the men employed at the colliery had subscribed no less than £2,600 for the benefit of the wives of soldiers during the war and since and were continuing the fund for the benefit of the widows and children.  Mrs. R.A. Pease, Richmond and Mr. M.H. Kellett, Chilton, formerly manager of the colliery declared the respective pairs of houses open.  Memorial tablets on the front of each pair of houses bear the names of the fallen and these tablets were unveiled by Mr. J.E. Brown-Humes.  Mr. James Robson President of the Durham Miners’ Association made a few remarks.”

These cottages were erected by the St. Helens Colliery workmen as a memorial to those who fell in the Great War.

Amongst others the following fellow workmen laid down their lives

These cottages were erected by Messrs Pease & Partners Ltd. As a memorial to those who fell in the Great War.

Amongst others the following workmen from St. Helens Colliery laid down their lives. 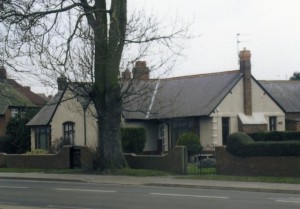