91960 Private T.W. Stephenson, 15th Battalion, the Durham Light Infantry died of wounds 31 May 1918 and is buried at Sissonne British Cemetery, France.[1]  He was about 25 years old and is commemorated on the Woodland War Memorial and the memorial plaque in St. John the Evangelist Church, Lynesack.

Thomas William Stephenson was born 1894[3] the son of Thomas and Phyllis Stephenson.  There were at least 8 children, all born in the Parish of Lynesack and Softley:[4]

In 1901, the family lived at the Edge, Woodland where Henry worked as a “winding engine man” and his son Arthur was a “tailor’s apprentice.” [5]  By 1911, the family lived at Lynesack Villa, Butterknowle and Henry worked as a “winding engineer” for the Woodland Co. Ltd.  22 year old son Henry was a coal miner, 17 year old Thomas William was an “apprentice mason.” [6]  By 1915, Thomas lived at 54 Newport Road, Middlesbrough. [7]  After the war, Mrs. Stephenson lived at 3 Lane Head, Copley, Butterknowle.[8]

Private T.W. Stephenson was wounded 29 April 1917 while serving with the Royal Fusiliers.  22/RF was under the orders of 99th Brigade 2nd Division.[13]  The Division was part of XXIII Corps First Army which saw action at the Battle of Arleux.[14]  22/RF lost 5 officers and 45 other ranks killed in action or died of wounds 29 April 1917.[15] It seems highly likely that Private T.W. Stephenson received wounds in this action.  His wound was a gun shot wound to the left thigh and he was admitted to No. 5 Field Ambulance and No. 24 General Hospital in Etaples before 10 May 1915 being transferred to England for treatment.[16]  He was granted furlough from 19 to 28 June 1917 and he visited his parents at Lynesack Villa, Butterknowle.[17]

31 March 1918 Private T.W. Stephenson was transferred to the Durham Light Infantry [19] and given the regimental number 91960, being posted to 15/DLI.[20]  The 15th (Service) Battalion, the Durham Light Infantry was formed at Newcastle in September 1914 as part of K3, Kitchener’s New Army and came under the orders of the 21st Division, 64th Brigade. [21]  The following units comprised the 64th Brigade:

The Division crossed into France 13 September 1915 and their first action was at The Battle of Loos in September 1915.  The 21st Division then saw action throughout 1916 on the Somme and during 1917 at Arras, Passchendaele and Cambrai.  Then in 1918, the Division encountered the full might of the German Spring Offensive.

The German Offensive, spring 1918 – an overview

3 March 1918: Soviet Russia made peace with Germany and her allies in a separate treaty, the Treaty of Brest-Litovsk.  This meant that Germany could now transfer divisions from the Eastern Front to the Western Front.  More importantly, these Divisions included the original elite of the German Army – the Guards, Jagers, Prussians, Swabians and the best of the Bavarians. In all 192 Divisions could be deployed in the West so that the Germans held superiority in numbers.  The Allies could field 178 Divisions.[22]  A single division numbered about 19,000 men[23] so the German Chief of High Command General Ludendorff could call upon about 3,650,000 men as opposed to the Allies 3,380,000.

It was essential that final victory was gained before the American Forces arrived in Europe in huge numbers.  America had entered the war 6 April 1917 and the first of her troops arrived in France 26 June 1917.  In July 1917, Pershing General of the Armies of the United States asked for 3 million men.[24]  The build up of troops took time but eventually by June 1918, the Americans were receiving about 250,000 men a month in France.  This amounted to 25 divisions in or behind the battle zone and another 55 in the United States.[25]

The French were able to draw on a new annual class of conscripts after a year of effective inactivity.  However, the British were worn down by continuous fighting following the major offensives at Arras, Messines, Passchendale and Cambrai during the summer of 1917.[26]

The German Spring Offensive was launched 21 March 1918 and took 5 phases:

The Germans enjoyed spectacular territorial gains particularly during the initial phases of the offensive which led the Kaiser to declare a “victory holiday” for German schoolchildren, 23 March 1918.

The German High Command calculated that it required 200,000 replacements each month but even by drawing the next annual class of 18-year olds, only 300,000 recruits stood available.  Also 70,000 convalescents from hospitals were available each month but even counting them, the strength of the German Army had fallen from 5.1 million to 4.2 million men in the 6 months of the offensive.  It could not be increased on the estimated scale required.[30]

In June 1918, the first outbreak of “Spanish Flu” laid low nearly 500,000 German soldiers.  This epidemic was to reoccur in the autumn and wreak havoc throughout Europe and the wider world. [31]

Added to this the poor diet of the German troops, battle fatigue, discontentment with the military leadership, social unrest at home and a general realization that their great effort was beginning to wane, the Allies counter attack in mid July began to seize the initiative.  Sweeping victories over demoralized German forces eventually led to the resignation of Ludendorff, 27 October, the abdication of Kaiser Wilhelm II 9 November and the signing of the Armistice 11 November 1918. [32]

The German Offensive in Picardy 1918

Together with other engagements, the Battle of St. Quentin is otherwise known as one of the First Battles of the Somme, 1918, part of the German offensive in Picardy.  The engagements are classified as follows:

The Germans enjoyed overwhelming superiority of forces – 58 Division against 16. [33]   The 21st Division served in the VII Corps as part of the Fifth Army and saw action at St. Quentin and Bapaume. [34]   The Division moved north to engage the enemy again:

Both are phases of The Battle of the Lys then:

The 21st Division formed the right of the British Corps and the front extended from a point about 1 mile north of Loivre on the Aisne and Marne Canal to Berry-au-Bac and the junction with the 8th Division.

13 – 21 May: Hermonville, at night relieved 6/299th (Bayard) French Regiment in the line.  The enemy showed little sigh of activity.

22 May: relieved and now in a reserve camp at Chalons-le-Verguer.  Training

26 May: morning, a church parade was held.  Evening – a warning to expect an attack

27 May: 1.00am mustard gas shells came down on the camp.  15/DLI moved off for Cauroy.  10.00am “C” Company sent forward to reinforce 9/KOYLI but the Germans were already on the main road so “C” Company went to reinforce 14/Northumberland Fusiliers holding Acancee de Cauroy.  “B” Company pushed out on the left to hold Boyau de la Somme, hoping to get in touch with the Leicesters of 110th Brigade, reportedly holding a redoubt called Centre Vauban.  “D” Company occupied strong points Bon de la Cuve, Bon de la Lavoir, Redoubt Nord and Redoubt Central.  The German attack was supported by a bombardment and “B” Company was pushed back to Avenee de Cauroy.

“15/DLI counterattacked with bombs and a bloody struggle was waged in these trenches on the outskirts of the village until German numbers prevailed.   During the afternoon the enemy occupied part of the Boyau de Beau Sejour and bombed his way into Avancee de Cauroy so that in spite of their desperate resistance “B” and “C” Companies were forced back to the sunken road east of Redout Sud.” [37]

5.30pm 97th Field Company RE arrived to reinforce the left flank, west of the village.  7.30pm and another onslaught came and the British line withdrew but Cauroy was not captured.  15/DLI held some advanced posts but after midnight was ordered to withdraw.

28 May:  4.30am, 15/DLI made their way to camp near Luthernay Farm, now in brigade reserve.  By 7.30am the position was under enemy machine gun fire.  Colonel Holroyd-Smith was wounded.  The battalion withdrew to a point south east of Prouilly and men came in during the afternoon after fighting stoutly. The tired troops were assailed with heavy shell fire and German patrols were active but an infantry attack did not materialize.  German troops were assembling in large numbers on the high ground.  In the evening the brigade was divided into 2 detachments, the 6 officers and 40 men of 15/DLI were under the command of Lieut.-Col. W.N.S. Alexander DSO of the East Yorkshire Regiment.

29 May:  the Germans were known to be in Jonchery and the line was brought back to the river Vesle.  15/DLI held a position on the south bank, west of Muizon then moved back further into support.  A fierce enemy bombardment ensued and at 2.30pm 15/DLI were relieved by French troops and moved back to Rosnay.

30 May: withdrew to bivouacs south of the river Marne in the forest of Epernay

Later research records between 27 and 31 May 15/DLI lost 3 officers, Capt. C.S. Herbert, Second Lieutenants J. Carter and R.C. Gutteridge (seconded from 6/DLI) and 122 other ranks killed in action or died of wounds. [41]

Private T.W. Stephenson was reported as missing.  In fact he had been seriously wounded and had been taken prisoner.  He died from his wounds, a penetrating gun shot wound to the right thigh on 31 May at 10pm in Bavarian Field Hospital No.28.  He was buried in the Military Cemetery at Chateau Porcien. [42]

Private T.W. Stephenson is buried at grave reference O.4 Sissonne British Cemetery, France.  The village of Sissonne was in German hands for almost the duration of the war.  The British Cemetery was made after the Armistice by concentration of graves from the German Cemetery, from other burial grounds and from the battlefield including those from Chateay-Porcien Communal Cemetery.  There are 291 Commonwealth burials, 127 are unidentified. [45]

[41] Officers and Soldiers Died in the Great War 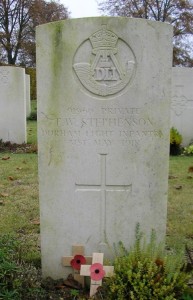 One thought on “Stephenson T.W.”