4394935 Private T.F. Stephenson, 6th Battalion, the Durham Light Infantry was killed in action 9 October 1944 and is buried at Jonkerboss War Cemetery, Netherlands[1] and is commemorated on Evenwood War Memorial.  He was 32 years old, husband of Rhoda and father to Norma.

Thomas was born 2 May 1912[2], possibly the 3rd child of Joseph and Rachel Stephenson.  There were at least 7 children – Elizabeth, Ada, Thomas, Harry, Joseph, John and Violet.[3]  The family lived at the Centre, Evenwood.  In 1935, Thomas married Rhoda Morley from Lands and they had 1 child, Norma born 1939. 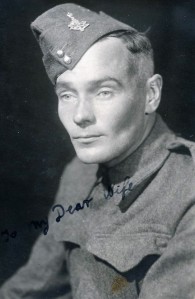 20 June 1940: Thomas Stephenson enlisted into the Green Howards [formerly known as the Yorkshire Regiment].  He was given the regimental number 4394935, being posted to the infantry training corps then 4 October 1940 he joined the 10th Battalion, Green Howards.

16 July 1943: Private T.F. Stephenson was transferred to the 11th Battalion, the Durham Light Infantry [11/DLI].[5]   11/DLI at this time came under the orders of the 70th Brigade, 49th Division [6] and from July 1942 to May 1944 was under training in Wales as one of the assault divisions for the proposed Normandy Landings.  It then moved to Norfolk to concentrate on the invasion. [7]

29 May 1944: Private T.F. Stephenson was transferred to 6th Bn., DLI.  6/DLI came under the orders of 151st Infantry Brigade, 50th [Northumbrian] Division.  The Order of Battle, 50th Northumbrian Division was as follows:[8]

50th Northumbrian Division or Tyne-Tees Division was recruited from County Durham, north and east Yorkshire and later from the Scottish Borders, Lancashire and Shropshire.  It fought with the British Expeditionary Force [BEF] in 1940 in the Arras counter-attack.  In North Africa, the division went from Gazala, El Alamein and Mareth to Tunis and won an astonishing 3 VCs.  Montgomery took the division to Sicily and then gave the 50th Division the dangerous honour of attacking on D Day, in the first wave ashore on Gold Beach.  The only D Day VC was awarded to CSM Hollis, 50th Division, 6th Battalion, the Green Howards.  Next came the deadly bocage fighting and later “Market Garden”.

Private T.F. Stephenson did not see action in 1940, France or 1941/42 Middle East and Egypt but would have been in involved in the invasion of Normandy.

6 June 1944: 50th Division landed at Gold Beach in the area between Le Hamel and La Riviere.  A full account of D Day action involving 6/DLI is given by Harry Moses.[9]

18 June 1944: Private T.F. Stephenson was wounded.  The Brigade was involved in a push on the road SW from Tilly to Hottot.  Fighting took place between 2.30pm and 5.00pm when the objective was reached.  An artillery creeping barrage was laid down, tanks, infantry, machine guns on carriers were involved. Casualties were light. [10]

21 June – 15 August: He spent 56 days at home, presumably receiving treatment for his wound including from 11 August a spell with 41 Training Centre.

9 September: He re-joined 6/DLI.  By this time 6/DLI was at Ramsel, south of the Albert Canal, Belgium.  The action and following involvement of 6/DLI is described by Harry Moses.[11]

The Netherlands fell to the Germans in May 1940 and was not re-entered by Allied forces until September 1944.  Nijmegen was a front line town from 17 September 1944 until February 1945.

The advance out of Belgium into the Netherlands was to pave the way for the march into Germany.  An airborne operation was planned to seize the 4 major waterways:

The Allied Airborne Corps would provide the troops for the enterprise:

23 September 1944: The Brigade now under the VII Corps moved into Holland.  News was received that the airborne troops were fighting fiercely to hold crossings at Veghel, Grave and Nijmegen.  Arnham was more critical.

26 September: The Battalion moved to Volkel near Veghal.

2 October:  relieved 6/Green Howards north of River Waal, crossed the road bridge over the river at Nijmegen under enemy artillery fire.  Battalion HQA and “B” Company area was shelled.  There were 3 Divisions in the line – 101 US and the British 50 and 53 Divisions.  The 50th was on the right with 6/DLI on the extreme right where the line swung back to the River Waal.

4 October: 231 and 151 Brigades ordered to assault near Haalderen and the attacks were successful. At night 6/DLI sent out a reconnaissance patrol – no enemy were seen.  “A” Company reported a small craft moving along the river, Bofors guns defending the bridge opened fire and another enemy attempt to blow the bridge was thwarted.

7 October: marched into Nijmegen into billets and the battalion was ordered to defend the vital bridges across the river:

9 October: at 9.45am, Harry Moses comments as follows:

“…some objects were seen floating in the water 6 miles west of the bridges.  They were thought to be one man submarines and the defences were put on alert.  No attack on the bridges materialised.  The enemy shelled the area of the bridges throughout the day.  One man was killed in “B” Echelon and a store truck was damaged.  “C” Company had one man killed and one wounded.  One despatch rider was wounded while crossing the bridge.”

10 October: enemy shelling continued, the bridges were hit several times and 3 men from “A” Company were wounded.

Two servicemen from 6/DLI were killed in action 9 October 1944, the other was Private A. Molyneux.  Both are buried at Jonkerbos War Cemetery, Netherlands.  Private T.F. Stephenson’s second spell in Europe lasted 55 days.

Casualties for the month were:

6/DLI was involved in action at Nijmegen and the Island throughout November and there were further casualties:

A press article read as follows:

“LANDS
News has been received by Mrs. Rhoda Stephenson (nee Morley) of the death in action of her husband.  Private Thomas F. Stephenson D.L.I. (aged 32) wounded in June and after several weeks in hospital and a period of sick leave he rejoined his unit for service in N.W. Europe.  He had been in the army over 4 years.  There is one child.  Of an unassuming nature yet always cheery and with a word and smile for everyone, Tom was very popular in the village.  Before his marriage he lived with his mother (the late Mrs. R. Stephenson) at the Centre Evenwood.  This family has been hard hit, Tom’s brother John being killed in action at Tobruk.  His brother Harry is at Randolph Colliery.  Joe his only remaining brother returned from the forces to work in the pits.  There are 3 sisters.”

Private T.F. Stephenson is buried at grave reference 11. A.5.Jonkerbos War Cemetery. [13] The cemetery was created by No.3 Casualty Clearing Station and is in a wooded area known as Jonkers Bosch from which it took its name.  It contains 1,629 Commonwealth burials of the Second World War, 99 of them unidentified.

Thanks to Norma and Kevin Garthwaite for the use of family material.