Norman Leonard Stout was born c.1917,[2] the son of Arthur and Agnes Stout and brother to Agnes and Arthur.  In 1911, the Stout family lived at Coundon Grange, Bishop Auckland where Arthur worked as bricklayer’s labourer. [3] In 1939, Arthur and Agnes lived at Toadpool, West Auckland with Norman and possibly 1 other child [record officially closed].  Arthur worked as a council mason, [local authority] and Norman was employed as a bricklayer’s labourer.[4]  In 1943, Norman Stout married Greta M. Hannar.[5]

The service details of 1556854 Gunner Norman Leonard Stout, RA has not been researched.  His death was registered at Winchester, Hampshire [6] therefore it is assumed that he died whilst on active service in the UK.  His headstone inscription reads, “…Gunner Norman Leonard Stout…was killed 22 July 1943” [7] which infers that his death was not the result of illness but rather accident, possibly in training.

Gunner Norman Leonard Stout is buried at grave reference D.B.31, West Auckland Cemetery in a private family plot.  He does not have a CWGC headstone. 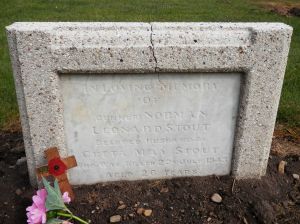 [3] 1911 census Note: there may well have been other siblings born later.