Second Lieutenant H.W. Summerson, 9th Battalion, the Loyal North Lancashire Regiment died of wounds 5 June 1918 and is buried at Marfaux British Cemetery, south of Rheims.[1]  He was 28 years old and is commemorated on the Cockfield War Memorial, the screen in St. Mary’s Church, Cockfield and the Bishop Auckland Grammar School memorial plaque.

Herbert Walker Summerson was born 21 September 1889 [2] at Cockfield, the oldest son of Herbert William and Alice Summerson.  There were 7 children, all born at Cockfield:

In 1901, the family lived at Garden House and Herbert William is recorded as a “colliery owner”. [3] The Summersons were well-established local entrepreneurs who worked the quarry on Cockfield Fell and numerous coal mines in the area such as Holly Moor Colliery to the west of Cockfield.

Herbert Walker Summerson enlisted into the Northumberland Fusiliers and was given the regimental number 46258.  The dates he enlisted and entered France are unknown but he did not enter France until after 31 December 1915 since he was not awarded the 1914-15 Star.[5]

Following severe losses during the Battle of the Aisne, 27 May-6 June 1918, the remnants of the battalion formed a composite battalion with the 8th Border Regiment and was transferred to 50th Northumbrian Division.[11]

First Battles of the Somme 1918

Battle of the Lys

After the exertions of April, the Division was moved to a quiet sector of the front.

9 May: entrained at Rexpoede to Fismes, 20 miles south west of Soissons in the Champagne area.  It was expected that the tired divisions could recuperate there.

26 May: intelligence confirmed that a heavy German attack was expected.  The 8th 19th 21st 25th and 50th Divisions formed the IX British Corps allied to the Sixth French Army.  The 25th Division was in reserve and ordered up into closer support.

27 May: At 1am a heavy German bombardment with gas and high explosive hit the whole area between the front line beyond Chemin and Fismes.  At 4am, the German infantry attacked and the 25th Division was ordered to hold the second line of defence.  The 8/Borders were instructed to hold the Aisne bridges at Pontvert and Concevreux.  By 10am, the 74th Brigade came under the orders of the 21st Division, the 75th under the 8th Division and the 76th under the 50th Division which, by now, were fighting for their lives north of the river.  By mid-day, the Germans had broken through and crossed the Aisne and the units of the 35th Division were thrown piecemeal into action.  They were all but destroyed.  The 11/Lancs. holding high ground north of Vesles, held out to the last man.   The remnants of many units were temporarily joined into composite units, fighting a withdrawal as the enemy pressed on many miles across the river Marne.

9 June: a decision had been taken to break up what was left of the Division to reinforce other formations. [13]

Later research records that 9/Loyal North Lancashire Regiment lost 2 officers including Second Lieutenant H.W. Summerson and 67 other ranks killed in action or died of wounds between 26 May and 14 June 1918. [14]

By his blithe, cheery and gentlemanly bearing, he having practised in the courts at Barnard Castle for a series of years, the late Lieut. H.W. Summerson, of the Loyal North Lancashire Regiment, who died of wounds in France, will be greatly missed in local forensic and social circles.  The deceased officer was the son of Mr. Herbert Summerson, Garden House, Cockfield and nephew of Mr. and Mrs. Robert Summerson of Fairfield, Galgate, Barnard Castle.  Lieut. Summerson was in practise as a solicitor at Bishop Auckland and Darlington and to the honour and memory be it said, he enlisted as a private soldier, about 2 years ago.  He was at one time in the office of Mr. T. Dowling, now a major in the Army Service Corps with whom he served his articles.  Lieut. Summerson has fallen in the prime of life, he being but 28 years of age.  By his suavity of manners and genial disposition he was everywhere esteemed and in local sport he was conspicuously and deservedly popular.  Much regret is expressed at his early demise.

Second Lieutenant H.W. Summerson is buried at grave reference VII.D.6 Marfaux British Cemetery.  Marfaux is 18.5kms from Rheims.  The cemetery was begun after the Armistice for the concentration of graves from the battlefield and other military cemeteries in the Marne, the vast majority of whom fell between May and August 1918.  There are over 100 burials, of which over 300 are unidentified.  Second Lieutenant H.W. Summerson was originally buried at Jonchery-sur-Vessel.  His headstone bears the epitaph provided by his mother, Mrs. Alice Summerson:

“Till the Day Break and the Shadows Flee Away” [15]

Second Lieutenant H.W. Summerson is commemorated on the Cockfield War Memorial.  His name appears on the 1914-1918 Memorial Plaque for former teachers and students at Bishop Auckland Grammar School.

Herbert’s parents provided a Memorial Screen in St. Mary’s Church, Cockfield in memory of their son, Herbert Walker Summerson.  It was dedicated in November 1920 by Rev. J.E. Phillips, Rector of Cockfield and Vicar of Staindrop.  An oak chancel screen, it is divided so that the centre section allows access to the chancel, the left hand panel depicts a half relief of a soldier kneeling at a prayer desk and the right hand panel carries the dedication: [16]

“In loving memory of Hubert Walker Summerson 2nd Lieutenant 9th L.N.Lans. died of wounds June 5th 1918 and buried at Marfaux.  This screen is erected by his parents.” 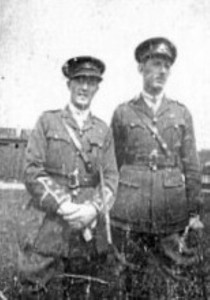 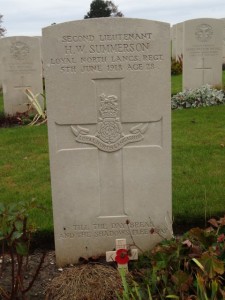 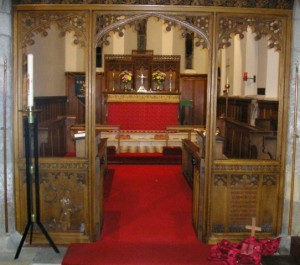 One thought on “Summerson H.W.”