27/1267 Private Richard W. Tate, 27th (Tyneside Irish) Battalion, Northumberland Fusiliers was killed in action 14 March 1916.  He was about 32 years old and is buried at Brewery Orchard Cemetery, Bois-Grenier, France[1] and is commemorated on the St. Helen’s Colliery Memorial Cottages.

Richard Wilkinson Tate was born 1883[2] at Copley. [3]  His parents were probably John and Elizabeth Ann Tate (nee Wilkinson).[4]  In 1891, Richard aged 7, lodged with his uncle, George Wilkinson and his family at Bridge Row, St. Helen’s Auckland. [5]  In 1901, he still lived with George, now at Tindale Crescent and aged 17, worked as a colliery labourer.[6]  By 1911, he lodged with Thomas and Francis Ward at Tindale Crescent and now aged 27 he worked as a coal miner (shifter).[7]

The 27th (Service) Battalion, (4th Tyneside Irish) Northumberland Fusiliers were formed in Newcastle by the Lord Mayor in January 1915.  They came under the orders of 103rd Brigade, 34th Division.  Other battalions in the 103rd Brigade were:

The Division landed in France 15 January 1916 and concentrated at La Crosse, east of St. Omer and remained on the western front for the duration of the war.[9]

Private R. Tate was killed in action 14 March 1916, about 2 months after landing in France.  The Division had not taken part in any significant actions.  Not until July 1916 and the Battle of the Somme would the battalion be involved in heavy fighting.[10]  Without studying the war diary it is impossible to say with certainty what happened to Private R. Tate.  It is assumed that was killed as a result of the usual violence of warfare – possibly a snipers’ bullet or artillery fire. He was the only 1 man killed 14 March 1916.  Between their arrival 15 January and 14 March 1916, the battalion lost 1 officer and 8 other ranks killed in action and/or died of wounds. [11] 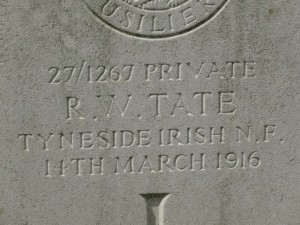 One thought on “Tate RW”