18866 Private Thomas Watson, 7th Battalion, the Yorkshire Regiment was killed in action 1 July 1916 and is buried at Fricourt British Cemetery, France.[1]  He was 28 years old and is commemorated on the West Auckland War Memorial.

Thomas was born 1888[2] at Esperley Lane [3] the son of Joseph and Jane Watson.  There were 6 children to their marriage and 3 to Janes’ previous marriage:[4]

28 December 1915: Thomas Watson enlisted at Bishop Auckland[9] and joined the 7th Battalion the Yorkshire Regiment (Alexandra, Princess of Wales’ Own) commonly called the Green Howards and was given the regimental number 18866.[10]

The 7th (Service) Battalion of the Green Howards was raised at Richmond during the early days of the war.  It was posted to the 50th Brigade, 17th (Northern) Division of the Second New Army.[11]  The 50th Brigade was composed of: [12]

13 July 1915: 7th Battalion sailed from Folkstone to France.  Its strength was 30 officers and 937 other ranks. Private T. Watson entered France on this date.[14]

17th Division had taken over the St. Eloi sector and remained there until October, doing tours of 8 days in the line and 8 days at Reninghelst.

5 August: a draft of 70 non-commissioned officers and men came out from England bringing the strength up to 26 officers and 961 other ranks

9 – 14 August: 7/Green Howards in the front line involved for the first time in an offensive operation i.e. providing fire on the enemy as a diversion to the British attack at Hooge.  In retaliation, the communication trenches and roads were heavily shelled.  The rest of the year was spent in the Ypres area then in March 1916, the Division took over the Lys sector ending 12 May.  Training for the great Somme offensive then took place.

The main line of assault ran nearly 14 miles from Serre to the north to Maricourt to the south with a diversionary attack at Gommecourt 2 miles further to the north.  The first objective was to establish a new advanced line on the Montauban to Pozieres Ridge.

A week-long artillery bombardment of the German positions preceded the first day of the attack – 1 July.  Just prior to zero-hour, the storm of British shells increased and merged with huge mine explosions to herald the infantry attack – at 7.30am on a clear midsummer’s morning the British Infantry emerged from their trenches and advanced in extended lines at a slow steady pace over the grassy expanse of a No Man’s Land.  They were met with a hail of machine gun fire and rifle fire from the surviving German defenders.  Accurate German artillery barrages smashed into the infantry in No Man’s Land and the crowded assembly trenches.  The British suffered enormous casualties:

In popular imagination, the Battle of the Somme has become a byword for military disaster.  In the calamitous opening 24 hours the British Army suffered its highest number of casualties in a single day.  The loss of great numbers of men from the same towns and villages had a profound impact on those at home. The first day was an abject failure and the following weeks and months of conflict assumed the nature of wearing-down warfare, a war of attrition, by the end of which both the attackers and defenders were totally exhausted.

Adverse weather conditions i.e. the autumn rains and early winter sleet and snow turned the battlefield into morass of mud.  Such intolerable physical conditions helped to bring to an end Allied offensive operations after four and a half months of slaughter.  The fighting brought no significant breakthrough.  Territorial gain was a strip of land approximately 20 miles wide by 6 miles deep but gained at enormous cost.  British and Commonwealth forces were calculated to have 419,654 casualties, the dead, wounded and missing of which some 131,000 were dead.  French casualties amounted to 204,253.  German casualties were estimated between 450,000 to 600,000.  In the spring of 1917, the German forces fell back to their newly prepared defences, the Hindenburg Line and there were no further significant engagements in the Somme sector until the Germans mounted their major offensive in March 1918.

27 June: moved up to trenches in front of Fricourt:

Heavy rain so the attack on Fricourt was postponed for 48 hours.

30 June: heavy enemy shelling of the cemetery held by “A” Company and the front line generally

7.30am: the great moment came and the assault began.  “A” Company had left its trenches at 8.20 – a message was received that many were lying dead and wounded in No-Man’s Land and they were being heavily fired upon by machine-guns and snipers.  Owing to the action of “A” Company, the fire of British gunners was considerably reduced since they were aware that many were lying in No-Man’s Land and in close proximity to the German wire.  As a result, the wire was practically intact in front of the cemetery.

2.30pm: “D” “B” and “C” Companies went over the top in succession from the right.  The assault came under enfilade fire from both flanks.  Officers and men of the 3 attacking companies were mown down – 13 officers and over 300 other ranks became casualties in about 3 minutes.

6.16pm: the 6th Dorsetshire Regiment relieved the 7/Green Howards and the battalion fell back and the wounded were brought in but the dead lay thick on the ground.

The casualties were very heavy:

Total casualties are given as 5 officers killed; 10 wounded; 336 non-commissioned officers and men were killed, wounded or missing.  Private T. Watson was killed in action.[17]

2 July: on the morning 51st Brigade was able to occupy the village of Fricourt without opposition, the enemy having evacuated the trenches during the night.  7/Green Howards had gone back to Heilly where they were joined by a draft of 46 other ranks.

Later research records that between 1 and 4 July 1916, 3 officers and 111 other ranks serving with the 7/Green Howards were killed in action or died of wounds.[18]  Of this number almost 50%, 53 of the 111 came from County Durham, many from the Sunderland area.[19]  Another local man to be killed in action that day was 19771 Private Fred Gaskin from Toft Hill. [20]  It seems highly likely that Privates Fred Gaskin and Thomas Watson would have been known to each other.

Private Fred Gaskin was awarded the 1914-15 Star, the British War and Victory medals. [21]

Private T. Watson is buried at grave reference A.27 Fricourt British Cemetery, Somme, France next to Private F. Gaskin.  His mother had the following epitaph inscribed on his headstone:

“Gone but Not Forgotten By His Mother”

[10] Soldiers Died in the Great War

[18] Officers and Soldiers Died in the Great War

[20] Officers and Soldiers Died in the Great War & CWGC 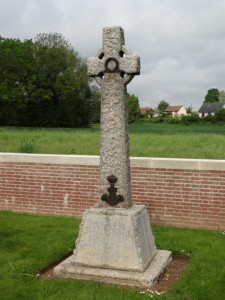 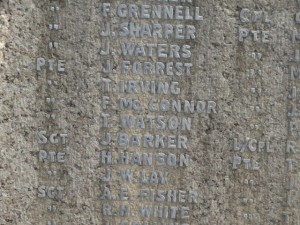