Harry Wilkinson was born in 1924[2] the son of Wilfred and Mabel Wilkinson and brother to Raymond, Norman and possibly 1 other sibling [record officially closed].  In 1939, the family lived at Redmire Cottages, Bildershaw, West Auckland.  Harry was not recorded as living here.[3]

The service details of Private Harry Wilkinson have not been researched and it is not known when he enlisted.  He was probably called up when he reached his 18th birthday, sometime in 1942, joining 10/DLI.

10/DLI was part of the 70th Brigade which joined the 49th Division in mid-1942 and remained with them for the rest of the war.[4]  The Division entered France 6 days after D Day.  It is likely that Private H. Wilkinson entered France with his battalion, 12 June 1944.

10/DLI was involved in the following action during the months of June and July 1944.

16 June: 10/DLI put in an attack on St. Pierre which 8/DLI had attempted to clear the week before.  10/DLI advanced through the village and found it empty however the Germans were hidden in the fields and orchards sniping and bringing down artillery fire onto their positions.

18 June:  Put in a company attack and took a number of prisoners, the battalion’s first of the campaign.

20 June: “A” Company were involved in an action where the Germans brought up tanks which were promptly dispatched by the battalion’s anti-tank gunners.

23 June:  10/DLI moved in close support with 11/DLI onto Cristot however after a bloody battle in which both battalions came under very accurate shellfire they moved forward once more.

25 June:  They were ordered to attempt to capture Rauray Ridge between Tilly-sur-Seulles and Caen.  The plan was for 11/DLI to mount the initial assault and for 10/DLI to attack through them.

26 June:  The DLI advanced to Fountenay-le-Pesnel where 10/DLI halted whilst as planned 11/DLI pressed supported by tanks of the Sherwood Rangers but without proper recce they were ordered to advance with fixed bayonets across a field where only that morning the Germans had brought down a fierce bombardment which knocked out a number of British armoured vehicles.  The Germans lay in wait with concealed machine gun posts and 88’s dug well in, 11/DLI advance bravely but suffered severe casualties. [5]

The following text is my summary which is taken from 10/DLI War Diary for the first 2 weeks of July which covers the period leading up to and beyond the date of Private Harry Wilkinson’s death. [6]

1 July: At rest at Parc du Boislonde but disturbed by enemy shelling.  Defensive positions were set up north of Fontenay-Le-Pesnel.

2 July: 16.00 hours, marched to Rauray to relieve 11/DLI & 1/Tyneside Scottish.  Enemy fire sustained 6-8 casualties.  Lt. Ellis with 9 Platoon attacked into the wood but most were casualties before reaching their objective.  The deaths of Lt. Ellis and his sergeant were verified.

4 – 7 July:  At rest.  A visit to an ENSA show at Bayeux.  Reinforcements to the battalion from:

20.00 hours, the battalion moved to the area south west of Tilly-Sur-Seulles to relieve 8/DLI and one company of 9/DLI.

9 July: Reconnaissance patrols [recce] from A Company under the command of Lt. Morson, B Coy Lt. McDougall and C Coy Lt. Suffron sent out to ascertain if the enemy occupied wooded areas.  Patrols returned with information.  No casualties.

At night two reconnaissance patrols went out, one by snipers, and one by C Company, (Captain Bax and Sgt Welford). Their objects were to enquire into the presence of the enemy in wood 835666 and in orchard 839665, and in particular to obtain information concerning the house in the South West corner of the wood. Both patrols returned safely with valuable information.

50th Division began a three-phase attack on to the Hottot-Les-Bagues area at approximately 07:00 hours and our role in this attack was to come in on phase three and secure a line 200 yards South of the main JUVIGNY – Hottot-Les-Bagues road.

Accordingly, at 06:45 hours a forward Command Post was established which was manned from 07:15 onwards. Reports were received that phase 1 was successful and our B and C Companies moved up to their Forming-Up Points.

There was delay, and we heard that a Battalion of 50th Division had bumped considerable opposition. It was not until 16:30 hours that phase 3 commenced and our attacks went in. C Company’s attack was supported by a troop of flame-throwing tanks. At 16:52 hours word was received of C Company success in phase 1 and later we heard that B Company had made their objective with only slight opposition.

B Company dug in and sent a patrol forward to 840663 which returned some 2½ hours later with information regarding the enemy positions. C Company reached their second objective except for a small orchard and house on their right at 833666. This house was strongly held by the enemy and the Company had already suffered heavy casualties from enemy shelling, mortaring and small arms fire.

Throughout these attacks, enemy mortaring and shelling was considerable and most of our casualties (three killed and fifty wounded) were sustained by C Company and originated from this cause. It seems probable that some of the casualties were indirectly caused by the action of the flame-throwing tanks. The flame caused a huge cloud of smoke which the enemy fired into with everything he could.

A Company sent a Platoon to thicken up C Company who had become rather thin on the ground and who, because 50th Division had not reached their objective, had had to occupy an additional position to cover their right flank. About 18:00 hours as a result of a message intercepted by Brigade it was learnt that our Forward Command Post had been located by the enemy, due, we were told, to two attached Commanders discussing our location over the air in clear. The Signals Officer thought it was due to Radio-Direction Finding.

Anyway, whenever our radio set opened up mortar fire resulted, and a direct hit was sustained upon a nearby supporting tank and the CO decided to move the Command Post back to our original HQ. In our two attacks B Company was supported by a squadron of SRY as was also C Company who in addition had some “Crocodiles” in support.

Twelve Prisoners of War were taken from 2nd Battalion, 986th Regiment and others killed. 231st Brigade on our right reached the line 814659 – 828664 after severe fighting since 07:00 hours. The day ended with intermittent mortaring and shelling and our two forward Companies were holding firm as follows – C Company in area 836665 and B Company in area 843668.

It is assumed that Private Harry Wilkinson was one of the casualties referred to in the War Diary, either one of the 3 men killed in action or as one of the 50 casualties, he possibly died of wounds later in the day.

A summary of the War Diary continues:

12 July: Periodical mortaring on both sides.  At approx. 06.00 hours an enemy patrol was ambushed in a wood and 2 killed.  One Polish deserter came over from 976th Regiment in the afternoon.

13 July: Relatively quiet.  Another Polish deserter gave himself up.  At night a change-over took place between 10/DLI and 11/DLI so that 10/DLI took up positions in the Le Pont Roc area.

And the war continued.

Private Harry Wilkinson is buried at grave reference III.C.3, Tilly-sur-Seulles War Cemetery, Calvados, Basee-Normandie, France.  His grave was among those was brought in from scattered battlefield sites.  His headstone bears the following epitaph:

Was a Beautiful Memory

His Loss a Silent Grief 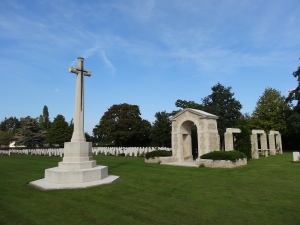 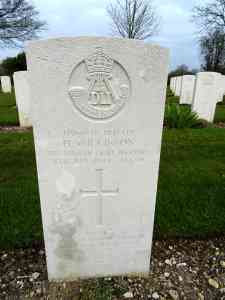 Thanks to John Dixon who has undertaken extensive research into 70 Brigade.