William Wilson was bc.1891[2] the youngest son of Robinson and Eliza Wilson.  There were 10 children, all born at West Auckland.  They were:

Robinson was employed as a colliery blacksmith and lived at various addresses in West Auckland and St. Helens.[3]  By 1911, sons John, Robinson and 20-year old William lived at home.  William worked as a colliery screenman.[4]

William Wilson enlisted at Sunderland and was posted to the 8th Battalion, the Lincolnshire Regiment being given the regimental number 30657.[5]

The 8th (Service) Battalion, the Lincolnshire Regiment was formed at Lincoln in September 1914 as part of K2 Kitchener’s New Army and came under the orders of 63rd Brigade 21st Division.  It landed in France September 1915 and in July 1916 was transferred with the Brigade to 37th Division.[6]  The 63rd Brigade comprised the following units:[7]

In 1917, the 37th Division was involved in the following battles and engagements:[8]

All part of the Arras Offensive

Private William Wilson was killed in action 4 October, part of the Third Battle of Passchendaele

The offensive had 8 distinctive phases:

Many Divisions visited the Ypres Salient during the Third Battle of Ypres and on more than one occasion.  A total of 54 Divisions were thrown into battle.  The offensive cost the British nearly 310,000 casualties, the Germans slightly less and it consumed all of the available reserves.

6 November 1917:  the village of Passchendaele was entered and the whole campaign ended a few days later when more of the ridge was taken.  It achieved none of its objectives although the Germans could no longer look down on the Ypres Salient which had been deepened by about 5 miles and they had been prevented from attacking the French when its army was in disarray following the failure of the Nivelle Offensive.

From the outset, it was obvious to the German Fourth Army that a new attack was being prepared and the previous year they had begun to strengthen their defences.  The British did not force home their initial advantage and it was not until 11 July that an air offensive began.

31 July:  the attack commenced when the British Fifth Army attacked north-east from the Ypres salient.  Initially, good progress was made but a strong counter-attack resulted in only a 2 mile advance.  Heavy rain fell on the first night flooding the swampy ground whose drainage system had been totally destroyed by the 10 day bombardment.  As a result, the whole operation was held up but offensive actions still took place.

3 October: evening, a heavy gale and rain blew from the south west

4 October: 6.00am the attack was directed against the main line ridge east of Zonnebeke, from the Menin Road to the Ypres-Staden railway a distance of 7 miles.  The 1st and 8th Lincolnshire Regiments took part, 8/Lincs attacked south of Menin Road.  The 8/Somerset and 8/Lincs formed up to attack the enemy and from the time they left their left their assembly positions both battalions came under murderous machine-gun fire.  The only comment made by 8/Lincs War Diary is “Attack unsuccessful”

“On the left the 8th Lincolnshire advanced and after going about one hundred yards came under fire of several machine guns which swept the slope.  Two of these appeared to be between the road and Joist Trench and another at Berry Cotts.  These guns inflicted very heavy casualties on the leading companies.  The enemy about one hundred strong, were occupying the trench about fifty yards east of the Jute Cotts Road and were reinforced from Joist Trench.  The enemy also made local counter attacks but it was held up here.  Owing to the whole plateau being swept by these machine guns and also by the machine guns to the south, it was decided that the attack could not get over the ground and owing to casualties, the original line was occupied.”

5 October:  the Lincs advanced their posts north of Jute Cotts to within fifty yards of the German line.

6 October: the battalion was relieved.

Later research records that between 4 and 6 October, 8/Lincolnshire Regiment lost 56 Other Ranks killed in action or died of wounds.[11]  Private W. Wilson was killed in action 4 October and has no known grave.[12]

Private William Wilson is commemorated on the Tyne Cot Memorial located in the Tyne Cot Cemetery, some 9 kilometres north east of Ypres, West-Vlaanderen, Belgium.  The Memorial to the Missing is one of 4 memorials to the missing in Belgian Flanders which cover the area known as the Ypres Salient which stretched from Langermarck in the north to Ploegsteert Wood in the south.  The Tyne Cot Memorial to the Missing forms the north-eastern boundary of the Tyne Cot Cemetery and bears the names of almost 35,000 officers and men whose graves are unknown.  The memorial was designed by Sir Herbert Baker and was unveiled in July 1927. [14]

[11] Officers & Soldiers Died in the Great War Note: no details are provided for officers serving with 8/Lincs but names are given for those who died 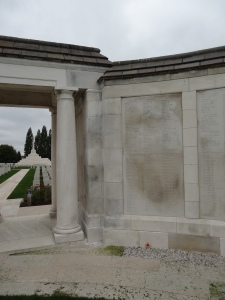 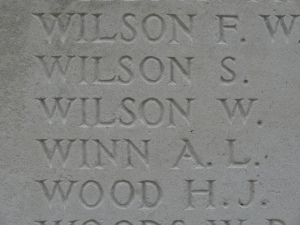